10 Years of Free Shoes: Catching up with Wiley & Michele

Just over a year ago, Wiley entered to win 10 Years of Free Shoes with her partner Michele in New York and on May 15, 2016 (aka. Fluevog Day), she became the reigning contest champ! A lot can happen in a year so we caught up with these two fun-loving globetrotters to find out where their soles have lead them lately.

What have you been up to since winning the contest?

We have traveled quite a bit to Europe for Wiley’s work, are both preparing for new jobs in July, and have been honing our vegan, gluten-free cooking skills. Also, Michele had a solo exhibition of her artwork in the fall and is gearing up for another later this year.

Which Fluevogs have you gotten since winning the contest?

Wiley bought the Sky Runners for Michele in 2016 and the Bartolis in wine in 2017.

What are your favourite pair so far?

While the Bartoli boots draw lots of raves, Michele wears her Sky Runners constantly and also loves sporting her Promises, as well.

Michele just wore the Bartolis to a swank event at the Museum of Fine Arts in Boston, and everyone she met commented on how fabulous the shoes were. 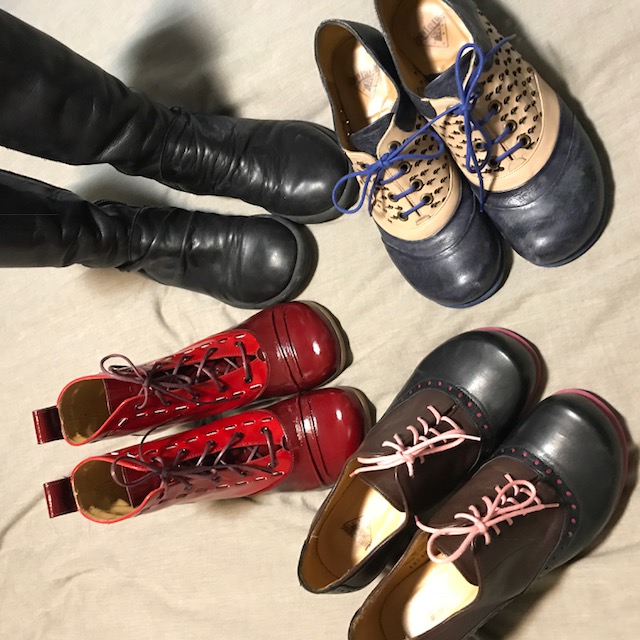 Don’t miss out on your chance to win this year’s 10 Years of Free Shoes contest! Visit us in stores or order online to get your entry in before the May 14th, 2017 deadline!

Email this Article Share on Facebook Tweet this Article Pin this Article
Back to FlueblogPreviousWay back Wednesday: The Bank of John FluevogNext10 Years of Free Shoes: Catching up with Renae