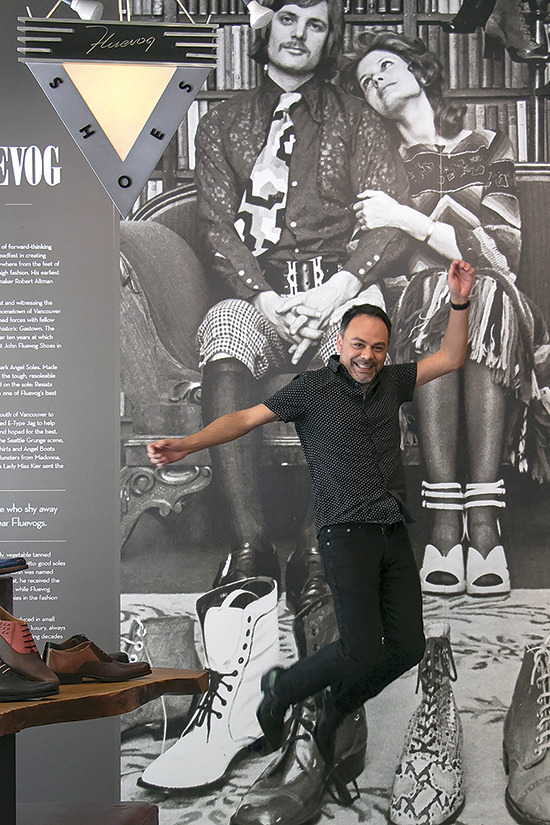 Where are you from?
Twin Falls, Idaho

What are your favourite pairs right now?
Mens: Swordfish are so iconic, super edgy and I think work on anyone.
Womens: I love the Munsters. I always encourage people to try them on just for the experience.

What were your first pair of Fluevogs?
Way back when the store first opened in Seattle, I got the catalogue and had my eyes on the NO. 634. They were platforms with a super rounded toe, teardrop cutouts and a big buckle across the top. I mowed lawns all summer long until I had the $89 I needed to get them. When they finally arrived in the mail, I put them on immediately and told my mom we had to go to the mall so I could be seen.

Describe Seattle in a nutshell:
Hello, it’s the Emerald City! We have amazing food, music and art scenes.

Seattle favourites for:
Food: Japonessa, latin-infused sushi
Music venue: Neumos or Showbox
Sightseeing: I always recommend people take the underground tour. Back in the day, Seattle actually burned down and was rebuilt on top of itself. You get an opportunity to see the underground parts and learn about the city’s history. We also have a world famous ferry system.

Something that would surprise people about Seattle:
We were the first city in the US to play The Beatles. We also had the world’s first gas station!

Something that would surprise people about you:
I can make a wig from scratch.

What is your favourite Fluevog Store (other than your own)?
Gastown has a very special place in my heart. My husband and I actually drove up from Seattle for the grand opening party.

Favourite part of working for Fluevog?
Aside from the cool shoes, it’s the customers. They’re all so quirky and individually awesome and full of all kinds of stories, fun and passion. I’ve worked retail my whole life and can say that Fluevog fans are like no other – they are next-level.

Strangest pronunciation of Fluevog you’ve heard?
You know, it was probably my mom who once called them flukeflogs.