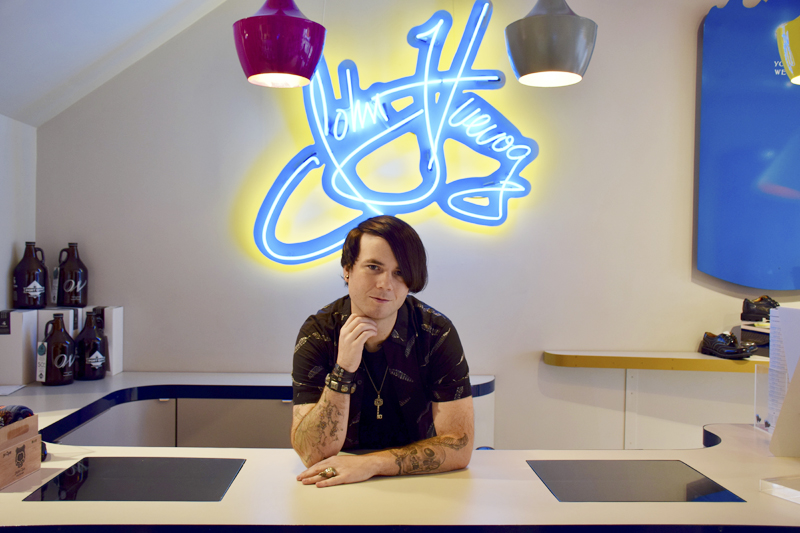 Years with Fluevog: 8 years as of February 2016

Where are you from?
Seattle originally. I actually interviewed at Fluevog Seattle right before moving to LA and ended up working at the Melrose store for 5 years. Then in 2012, I made the move to DC to work in and open the new store.

What are your favorite spring shoes for men and women?
Mens: The BLQ. It’s just so easy to wear and one of only two Fluevogs I own that I already have a back-up pair for.
Womens: The Guide. I love that while most people don’t like it on the shelf at first, it always looks great on. It’s the ultimate surprise shoe.

What were your first pair of Fluevogs?
I bought a pair of Lucky Studs, which are knee high Angel boots, about 9 or 10 years ago in Seattle after my hairdresser recommended I check out the store.

Describe DC in a nutshell
It’s where the politics happen.

DC favorites for:
Coffee: Baked & Wired in Georgetown – they have great coffee and stellar cupcakes.
Food & drinks: Westover Market & Beer Garden in Northern Virginia. In the winter, they light up fire pits and in the spring and summer, there’s live music, so it’s the perfect place to kick back and relax.

Something that would surprise people about DC:
It’s got more charm than I think people expect and is a great city to just walk around and get lost in. That and how big the Smithsonian is. Even after a few visits I haven’t put a dent in all there is to see there!

What is your favorite Fluevog Store (other than your own)?
My instinct is to say Melrose because it’s a place of nostalgia for me, but I also love the Chicago store. It’s so big and open and I think the fact that it used to be a local movie theater gives it a lot of character.

Something that would surprise people about you:
Probably my hobby, which is also one of my life joys – traveling to amusement parks around the world. So far, I’ve ridden more than 600 different rollercoasters, been all over the US and to places in Canada, Japan, Finland, Sweden, Norway and Denmark chasing all the different parks.

Favorite part of working for Fluevog?
My co-workers. I have a great team around me, but even working with staff in other cities is pretty seamless. They’re always friendly and pleasant to talk to whether you’ve known them for a few weeks or a few years. It really feels like working with family.

Strangest pronunciation of Fluevog you’ve heard?
My favorite is when people purposely mispronounce it to sound like something the Swedish Chef would say, like: Fluevergenbergen.